Every week I meet players who complain to me about their lack of scoring consistency. They tell me about how one day they can play nicely and the next day shoot a score that is 10 shots higher. The reason they have come for a lesson is they want to shoot more of the lower scores and less of the higher ones. These players suffer from golf’s consistent scoring myth.

If you have been playing golf for any length of time, you have probably realized it is a really hard game. The reason it is hard is that every shot is different and you are different every time you swing the club. With all that in mind the sort of tight scoring bands that most players desire is simply unrealistic.

Just recently Brooks Koepka was recognized as the number 1 player in the official world rankings. In 2018 Brooks won two Majors and was awarded Player of the Year on the PGA Tour. You could reasonably assume that the best player in the world is extremely consistent with his scores. Let’s take a closer look at his scores from the past year. 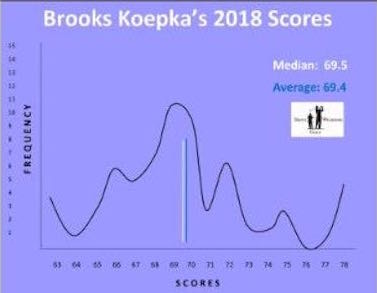 The accompanying graph (courtesy of Trent Wearner) shows a bell curve of scores for Brooks from this year. During the 2018 season Brooks had a scoring average of 69.4, and a 15 shot difference between his highest and lowest scores. 15 Shots!! For the best player in the world!

You can do the same analysis for any world class player and you will see a similar scoring dispersion.

Let’s assume for a moment that you are not as good a golfer as Brooks, so why should your scoring difference between your lowest and highest rounds be less than him? It shouldn’t.

The first thing to learn from this is to be realistic about your scores. Realize that you will have good days and bad days and that the difference between them will be several strokes.

Secondly, consistency in golf is a myth. There are too many things that vary not only from day to day, but also from shot to shot.

If you really want to remove those high rounds, you need to move the whole bell curve to the left. Your worst scores need to be lower but your best scores also need to be lower, so the average will be lower too.

Consider the area of your game that contributes most to your higher scores and get some help on improving that skill. You don’t need to improve everything at once. Start with the one shot that gives you most trouble and start this week moving your bell curve towards lower scores.